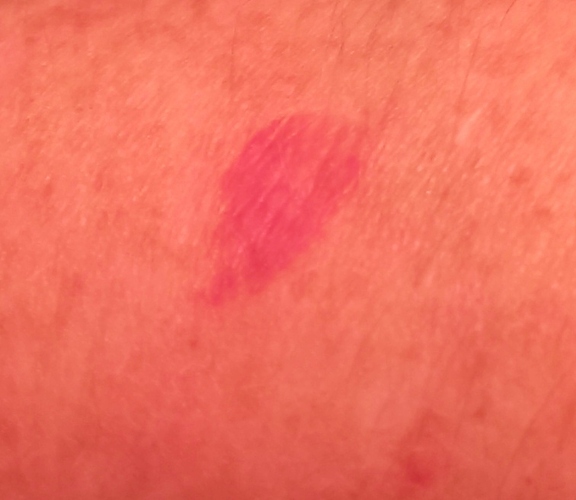 upload.jpg757×656 102 KB
I know that nobody can diagnose here, but I noticed a scaly dry patch on my forearm today about 2 cm. I scratched it and now it is blood red ( much darker than the photo ). Up until now I have only had nail and inverse psoriasis but I would like to know if this looks like it is possible that this could be a small plaque psoriasis lesion. I am starting Stelara next week, not a moment too soon.
Stoney August 1, 2014, 8:56pm #2

Could be? Are the flakes silvery white? It may be something to just keep track of. If it's psoriasis the biologic will help. If not, bring it up to the dermatologist next time you're in. It's definitely not worthy of a separate appointment unless there are significant changes.

It looked like a small patch of dry flaky skin,,,whitish flakes. I was really surprised when I saw the bright red skin underneath. I have been to three separate dermatologists, one recently who said my nails were 50-50% that it could be psoriasis and that my inverse complaints were most likely yeast ( which I know I don't have an overabundance of anywhere else down there ) so I am not spending another penny on dermatologists. I will show it to my Rheum doc when I get my injection next week.

It's just that having mild/atypical psoriasis symptoms seems to fuel my denial that this is psoriatic arthritis and not something else. Stelara is specifically for psoriatic disease and I think it is reasonable to be relatively sure that you have psoriatic disease before you expose yourself to such a risky medication. I'm just frustrated right now....I'd like to know what I am dealing with.