How long would it take you to "FIRE" this doc

Found on Facebook. It would take ME seconds to fire her though, While I can see the humor in it, it is partnership. Educating yourself to ask intelligent questions is critical but learning to listen is important too… 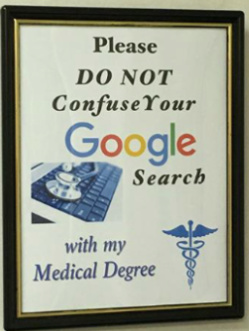 Technology has changed how we live and do business. Business adapts and changes, education changes, social interaction is different from the way it used to be. Doctors are just going to have to learn to work in the information age. They’ll just have to use information technology and their hard-learned skills to keep ahead of me on Google.

My doctor, to give her her due, is upfront, and will now ask me “what have you been googling?” and I tell her. I just wish that she had used the info technology that she had at her disposal when I was suffering and undiagnosed. During that period, I believed that consulting Dr. Google could only lead to trouble. I no longer feel that way, nor do I try to disguise the fact that I research everything.

I wouldn’t get through the door! It is impossible for me to be an active participant in treatment decisions (which is normal, especially after the first line treatment fails) unless I actually have some idea of what the heck the doctor is talking about!

You’ve hit another nail bang on the head.

Much as we might tell each other not to google ourselves into a nervous breakdown, most of us probably found this site on Google and some of the most sensible discussions I’ve ever read about PsA are to be found here.

Back in the day I was press-ganged into teaching IT which was a bit of a joke given that I sometimes struggled to open an email. But far and away the best bit of the syllabus was teaching 11 year olds how to assess the reliability of internet sites. I don’t know if the kids learned anything but the need to at least try to do that stayed with me.

I would say that in the UK we don’t usually think in terms of ‘firing’ doctors. Because we get treatment free at the point of delivery there’s a slightly different dynamic. Nonetheless I have in effect done that in the past. I’ve only met one rheumy who actually stated that dealing with the disease is a partnership and her words were music to my ears. For some of us it’s a real struggle to understand the disease and treatment enough to be a part of that partnership but it’s so worth trying.

most of us probably found this site on Google

Agreed! My doctors never mentioned LWPsA to me and I was just lucky to find it searching the web for helpful info about PsA!!!
Also, I like how you taught 11-year olds how to find reliable internet sites! What a great idea to teach them that at such a young age!