For a while now I've had a nodule growing on my left forefinger PIP joint. It's sore and if I catch it ....ouch!!!!!! It has doubled in size in about four months.

Have asked the rheumy about it twice and got different answers each time, so nothing new there :-( 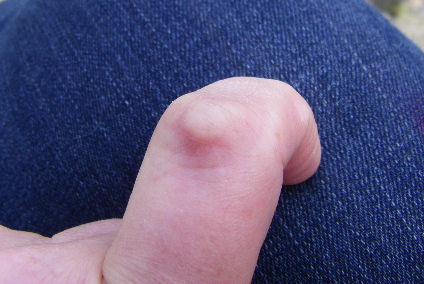 Does anyone else have anything like this? Is it a Bouchard's node? If it is, does that mean I've got OA in this joint?

I've got one on my pinky DIP joint. My rheumy said it's OA. But here's the thing. This can happen in joints impacted by PsA, that they don't move correctly, and then you develop OA. I'm only 42 (fine, 43 next month) and have a nodule on one joint.

My mother's hands are ridiculously deformed with huge nodules, and many are partially or completely fused. For years it was blamed on OA, but guess what? The recent imaging looks like it's PsA, and she is now on MTX and responding.

So interesting, Stoney, to hear about your situation and your mom's likely misdiagnosis.

I am interested, too, Jules on what happens to these kinds of things over time. I've had some distal joints become quite loose lately and the doc felt a couple of joints and said he felt the bone spurs (which I imagine I'm developing to try to keep my range of motion in the joints a little more restricted) but I have no clue what happens to these bone protrusions and nodules over time. Do they always fuse? Do some go away? Do they need surgical intervention?

Sorry to have more questions than answers!

Thanks Stoney and Jane. I figured it HAD to be connected to the PsA somehow. The same joint on the middle finger is enlarging laterally both sides .... got blown off by the rheumy on that as well.

Scares me the speed this is growing and wonder whether I'm going to wake up one morning and have no movement in the joint.

Am currently looking at paying for some private MRI's and getting a second opinion on the extent/severity of my PsA. Problem is I have so much of my body involved it's getting hard to decide which four areas to have scanned and I can't afford any more at the moment. Although I figure a second opinion from a PsA specialist should be able to examine and explain a nodule on a PIP joint?????????

Jules- what is your current treatment? Does it need to be more aggressive?

Hi Stoney, I'm on my second biologic. Back in February when I first asked about the nodule they said lets see what happens when you're on the Simponi ...... as far as the nodule is concerned the answer is 'nothing positive'.

When I had my very first dose back in March my bodies reaction was nothing short of miraculous and I had a good two and a half weeks where I felt better in myself, almost non-existent fatigue, brain fog lifted and my joints, well, it was like I could feel them getting better by the day.

In myself I felt well/healthy for the first time in nearly three years. Unfortunately in the third week it felt like the dose ran out of steam and I came crashing down. Subsequent doses haven't given me the same improvement but I'm better overall than I was pre-Simponi so I hope this means it's still working for me. There is an option to add MTX back in but this will be last resort for me because of how unwell it made me.

So, in theory, my treatment is aggressive/the best available. This is why I feel I need to be seen by a rheumy who is a PsA specialist to make sure we've lifted and inspected under every stone. I know one of my first x-rays showed some erosion on a finger but it was one of the DIP joints ..... the conversation was long before I knew I needed to pay attention to this kind of thing!!!!

Having steriod injections in my knees tomorrow, I think I've got a nice doc doing them so I'm going to ask him about the nodule as well. Will laugh if I get a third different answer.

...... and I mustn't forget that Lamb told me the bio's can be slow burners for peripheral disease .....

It certainly sounds like you're on top of things. I'm on my first biologic. I've had no major improvement, but I didn't have a major flare this spring either, which has been a consistent thing. It's also the minor improvements. My elbows only hurt at the end of the week or if there's a missed dose. My wrists and shoulders are no longer hurting me. You get the picture.

Stoney, good to hear that you're getting some results from your bio, even if it's slow results. I wish I'd been here on LWPsA when I had my first bio as my 'expectations' would have been far more realistic than they were. Here's to continued improvement :-)

yeah--it's tempting to expect miracles from biologics, isn't it. I had a really great response to Enbrel that made me feel norma; again. It soon petered out, though. Humira has been the slow and steady tortoise to the Enbrel hare. And I agree with you, Stoney. I notice not so much feeling well than I notice not feeling ill. Subtle differences matter.

Glad to know you're still thinking of pursuing things more, Jules. And I agree that sometimes it seems kind of odd to think about getting diagnostic tests for a knuckle, But you do need your fingers. And if your knuckles are bad, is that an indication that your disease is active elsewhere? How would you know unless you had a diagnostic baseline to work from.

Just a real quick reply, Jane, to say that the more I know the more disappointed I've become with how my disease has been monitored and the supposed baseline! I feel that my disease is active, possibly very active, and it scares me in spite of being on Simponi so I'm heading off down the route of getting some MRI's and a specialist second opinion. I'd rather spend my money and be told I'm wrong, it's all under control, than discover way too late that my instinct was right and I've got terrible damage.

… I’d rather spend my money and be told I’m wrong, it’s all under control, than discover way too late that my instinct was right and I’ve got terrible damage.

Some doctors are about as human as the pile of rocks in my daughter’s turtle tank. Just because only have one swollen joint and very little psoriasis, doesn’t mean my disease isn’t active. Still hurt!? Have another Celebrex! Thanks doc for the heart attack in the bottle.

I apologize for the rant, but reading this thread makes my blood boil. I understand that you are your best advocate, but you shouldn’t have to go behind your doctor’s back because he doesn’t understand or care that you feel like a pile of poo. I think your doctor patient relationship is dead at that point.

I hear you mataribot! Sometimes it's the system that's broken not the individual docs that are working within the system. Whilst the theory of universal healthcare that we have in the UK is fantastic the rules and constraints placed upon the docs means that they can't always commission costly imaging because it's what the patient wants or swap us around on bio's etc ..... so there comes a point where as a patient you have to take a bit of control and help yourself and hope that it also helps your docs.