I am optimistic again !!! The news about the genome project is so exciting for us with HLA - B27 spondylarthropathies !! maybe we will be able to sort out some of the mysterious links, when we learn to respect our individual genome characteristics- need for sunlight, cold, carbohydrate tolerance, seasonal variation in fat intake, high fish intake ,no grain- (my guesses - based on the distribution pattern of those with this allele - and if you have the Psa diagnosis - thats you. 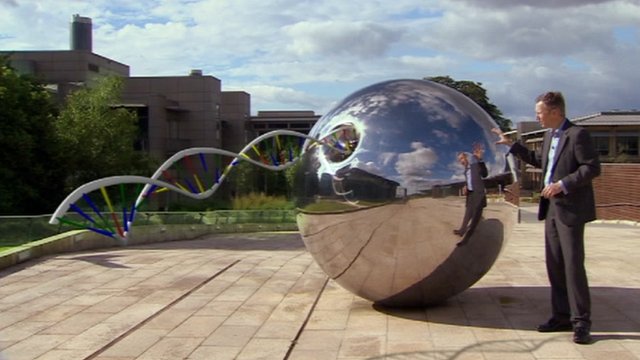 Scientists have published the most detailed analysis to date of the human genome.

They've discovered a far larger chunk of our genetic code is biologically active than previously thought.

The researchers hope the findings will lead to a deeper understanding of numerous diseases, which could lead to better treatments.

More than 400 scientists in 32 laboratories in the UK, US, Spain, Singapore and Japan were involved.

The Encyclopedia of DNA Elements (Encode) was launched in 2003 with the goal of identifying all the functional elements within the human genome.

A pilot project looking at 1% of the genome was published in 2007.

Now the Encode project has analysed all three billion pairs of genetic code that make up our DNA.

This will give researchers a whole new world to explore and ultimately, it's hoped, will lead to new treatments.”

They have found 80% of our genome is performing a specific function.

Up to now, most attention has been focused on protein-coding genes, which make up just 2% of the genome.


Genes are small sections of DNA that contain instructions for which chemicals - proteins - they should produce.

The Encode team analysed the vast area of the genome sometimes called "junk DNA" because it seemed to have little function and was poorly understood.

Dr Ewan Birney, of the European Bioinformatics Institute in Cambridge, who led the analysis, told me: "The term junk DNA must now be junked.

"It's clear from this research that a far bigger part of the genome is biologically active than was previously thought."


The scientists also identified four million gene "switches". These are sections of DNA that control when genes are switched on or off in cells.

They said the switches were often a long way along the genome from the gene they controlled.

More of human DNA is active than was thought

Dr Birney said: "This will help in our understanding of human biology. Many of the switches we have identified are linked to changes in risk for conditions from heart disease to diabetes or mental illness. This will give researchers a whole new world to explore and ultimately, it's hoped, will lead to new treatments."

Scientists acknowledge that it is likely to be many years before patients see tangible benefits from the project.

But another of the Encode team, Dr Ian Dunham said the data could ultimately be of help in every area of disease research.

"Encode gives us a set of very valuable leads to follow to discover key mechanisms at play in health and disease. Those can be exploited to create entirely new medicines, or to repurpose existing treatments."

Wellcome Trust Sanger Institute director Prof Mike Stratton said the results were "remarkable" and would "stand as a foundation stone for human biology for many years".

He added: "The Encode project will change the way many researchers conduct their science and give those who seek to understand disease a much better grasp of where genetic variation can affect our genome for ill."