I am pretty desperate at this point. I have an old bottle of steroids and an unopened pack of Humira in my fridge. I am two weeks shy of my next Remicade and I feel like I’ve been hit by a truck. I want to be fixed. I am so tired. Do you think my antibodies forgot what Humira looks like? What if I could get it weekly and had the MTX along with? Would it work? I act like it is my only hope, but only because it worked so well when it worked. My rheum at the time was a nasty little snark (beware of nurses who become docs. They couldn’t hack it) said, “it’s not indicated.” I told her I was well aware, but there is this little think called off label prescribing. Then she put fibromyalgia and chronic pain syndrome in my chart.

(Ps the mystery continues. Still with the crazy high ANA, RNP and rheumatoid factor. Mixed connective tissue? Next stop MRIs (4 of them!). Then off to Hopkins.)

The craziest thing I have done latley is I sent an Email to the Washington Redskins demanding they get rid of their awful and offensive name. I suggested going forward they just call themselves the Redskins...

As far as you go Grumpy. I think you are overworking and overdoing with the new job not theat you areen't a Type A+++ If you are going to do anything crazy. I'd get someone to watch the kids check out of the world (turn off the internet and cell phone) check into a Hotel (with room service) with old man. Hang a do not disturb sign on the door. Get a hot tub room and spend the weekend naked, soaking, "adult exercisising" and drinking Margaritas. (Open the door far enough to shove in food.) Come Monday you will either feel great or be so hungover you won't notice how else you feel. Either way you would be better off than mixing biologicals......

Then get your charts corrected.

I think I want to dump Remicade. I have this hope that weekly Humira and MTX will do something. Humira works super fast for me, like after a week. When I was last on it, I noticed improvement after my first loading dose. I wouldn’t mix. I’m just thinking of treating myself, like every self respecting crazy person. I know I just need to talk to my rheum. I think he will let me self prescribe my treatment at this point. He’s at a loss. That’s why he is sending me to a friend at Hopkins. I am going to a new pm doc in the next few weeks. I actually KNOW and respect him very much. I am hoping that he can whittle me down to rescue meds and PT. I am hoping he doesn’t have a massive earwax build-up, like the last pm doc. I don’t need someone upping my meds, then calling me a junkie. I want to get better! Not stoned-er.

I am working seven days a week. I know it’s not good. I worked very hard last week to get everything I need to do crammed into a 50 hour schedule for this week. So far, I am sticking to it. The gal whose patients I assumed care for have nothing documented in their charts for more than two months in some cases. Most aren’t that bad…no documentation for six weeks. You KNOW I can’t let that go. I’m fixing a chart a day, until I get through it. I’ve got members on this program who have illness burden scores in the green and don’t need or really want a nurse. I have to wrap that stuff up. Expired election to participate forms, outdated care plans, and providers who don’t realize that they are signed up. sigh It will get better, but it is going to take a ton of work. I love it though. All of it. I found my calling. And each week, I work a little less.

I’m all for escaping with the hubs. I need to survive our Cub Scout camping trip this weekend, then I plan on kidnapping him. There is a lovely little cabin in VA that is calling…

The snarky rheum corrected by charts on her own. I got a copy that day, and again the day I left the practice. It is a much different note.

So you do understand spending the weekend naked drinking margaritas with the cub scouts is a bad idea.

See you are not crazy after all.

I'm not a remicade fan. There is so much mouse in the underlying "Ladder" that its bound to wear one out. Your autoimmune system doesn't like mouse. Thats why I would far prefer Humira or Enbrel. A few hamsters give their all but what comes out has no hamster and no mouse. Everything else (biological anyway) is engineered DNA from something else.

I have always believed less meds more often makes sense. You might be one of the rare ones where a daily predi (5mg) gives you the edge you need.... (and you KNOW how much I hate predi) Also you may want to try one of the newer DMARDS as so so much of your pain is peripheral. The bios usually won't touch it.

laura, you are wicked.

As far as dropping acid! It may not be so crazy (timothy leary was) They are actually involved in some active research the last few years. It was originally devloped as a headache remedy in the thirties. I have to admit once at an Iron Butterfly concert I may have tried it. That was the end of my psychadelic experience.

We BTW recently banned a guy who suggested a sex cure for PsA pain to several members.....

That has got to be the most creative way of " turn on, tune in, and drop out" I have ever seen laura. Well played!!!!!

Wow… Is this what’ll happen when I get to “advanced stages” too?! Potential psychedelic experiences; horniness so intense that I go bisexual; (Jim might have a big problem with that happening to me!) – I’m not even going to hint at possibly drinking margaritas and hanging naked with the Cub Scouts – a LOT of people will object to my doing that! But the support from you all trying to talk some sense into me (or seeing the point I’m at and offering to join me!) – now THAT I can deal with! You all are the greatest! I’m loving the humor when it gets to be one of the only things left to carry us through! (Some of this IS humor, isn’t it?!

Is it just me, or does anyone find it disturbing that while they have been able to create a mouse with high TNF levels, that in order to have that mouse exhibit PsA, they give it Doxycycline??? FWIW the folks over at "the way back" are telling us this is the cure???? Not to mention the "hiding Lymes disease folks" or even the STD folks????? I'm gonna have to read this a few times. Although I have found when it comes to wacky sense of Humor The geneticists top the list.

Can you imagine spending years of study to become a mouse breeder??? (although at 3grand up/mouse it is more profitable than raising cattle......

Laura, get out of the library and drink some margartitas. You are studying way too hard.

Now that is just too wierd. BCG has been around since the late 20's..... It was supposed to be a vaccine for TB. About 1985 an outfit up the valley modified it to treat cancer in cows (Bovine Paipillary Carcinoma) Now its been modified again as an HPV vaccine for humans and to treat bladder cancer.

But shouldn't you be studying MRI cuts? whats all this genetics?

I really don't know a lot about targeted imaging, I remember how thrilled we were to have contrast for X-rays as opposed to the specific peptides/proteins etc you kids are using now.

I also remember what a mess the plaster casts we used during THR surgery made. It 4 of us to get em on.The fancy drills hadn't been invented yet we use traction and cast to hold bones in place to heal. I still have a few Black and Decker drills left. They couldn't be sterilized because they weren't a sealed unit so they could get blood inside the "works" So every surgery got a new drill............. I don't think we could visualize the level of Joint replacement today.

Lol love this discussion! Been out the loop a bit over the last week or so. Have to say a little R&R can restore the mind balance, may have found my own treatment plan for my PsA…Hot climate, all inclusive holiday, lay around a pool all day with a few swims to loosen up the old bod. Then spend outrageously funny nights in hilarious company…stroll in at 3am sleep til 10 then repeat

You guys have lost it. Just in case you were still holding onto the hopes that you are still sane, I have bad news…

I do think that a jug of margaritas would make Cub Scout camping a whole lot more bearable. Last year I was the only one not toasty by dinner. I was afraid that one of the dad’s would combust from the fumes he was exuding while he helped me grill dinner.

Laura,
You’re going to want to wait until you have a normal set of LFTs drawn before imbibing! 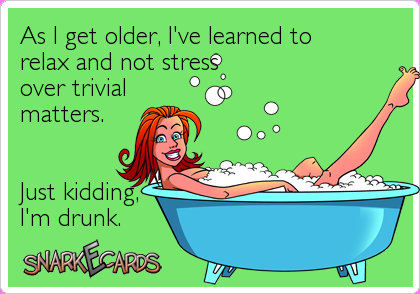 That's the ticket. Now if you can just get the NHS to fund it...

Came home relaxed tanned with minimal pain (except for 1 toe)and normal sunny disposition back in place :)

Not a weekend Grumpy - sounds like you need a couple of weeks! I just got back from an amazing reef and sailing holiday - I haven’t been this well for years!

I know I couldn’t afford it without some sort of type A job, but I am thinking maybe I could find one with a bit less stress, a few more holidays, and a little less money - not so crazy

I may not have been the most active poster, but I have been skulking this forum for quite some time. I generally find the members threads to contain information that is informative and on the money. Imagine my surprise when I got to this one. Cub Scout badges for margaritas? Really?

They just don’t give those badges away. Try mojitos. The added use of a muddler makes the task a bit more challenging.

As for doing something wacky, I have uttered the phrase “it seemed like a good idea at the time” more since my PSA diagnosis than since my teens.

We all survived! Now I need two days off to recover…

I looked at all my cub scout badges, and am lacking the mojito badge so therefore have scheduled a trip to Belize to earn that badge. Belize of course being the source of Barrel One Rum. The bad news is Feb was the first opportunity...........

I may not have been the most active poster, but I have been skulking this forum for quite some time. I generally find the members threads to contain information that is informative and on the money. Imagine my surprise when I got to this one. Cub Scout badges for margaritas? Really?

They just don't give those badges away. Try mojitos. The added use of a muddler makes the task a bit more challenging.

As for doing something wacky, I have uttered the phrase "it seemed like a good idea at the time" more since my PSA diagnosis than since my teens.

Belize? I think I’d like to give that a whirl for a week or three. I’m afraid my first opportunity will be spring, but I think I deserve it!