I don't have any skin issues, only joint issues and my Rheumy thought I might have minor pitting and ridging on my nails. On my one finger where my joint is disfigured, the nail is looking really strange, and I wondered if anyone could give me an opinion if this is what the psoriatic nail looks like. Sorry the picture is so big...couldn't figure out how to shrink it!!! 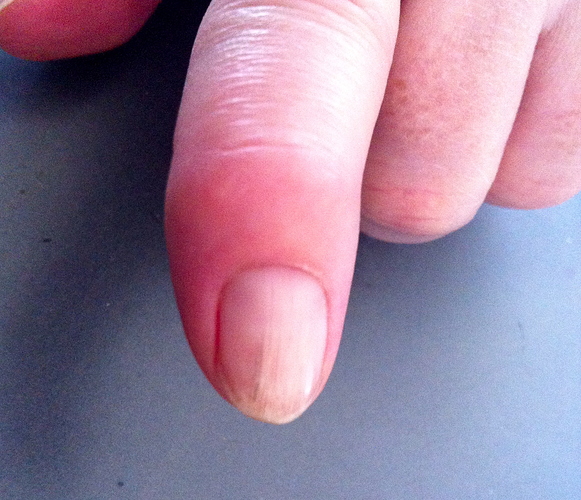 It’s a coincidence maybe but my big toe nail looks like that…I’d take a photo to show you but I have hidden the putting/ridging with a rather fetching magenta nail polish.

Yup, thats what it looks like, especially if there is some "pitting" and yellow mange But that sausage your nail is connected to is telling too......

I tired nail polish too but my wife got concerned, also if yoy want some real pain have your nails brushed smooth with one of thoses blocks..... (I show sewing machines these days so my hands are on display......)

AARRGGHH!!!! That's what I was afraid of!!! It is really weird, that nail started out really "hard" and whiter than all the others once the joint disfigured...almost like it calcified or something...it just recently started to look like it is. I know I have the sausage fingers and the tip of that finger with the nail that is photographed is disfigured (bent at 45 degrees down and pointing inwards...some other pictures of my fingers on my page!)...I just wasn't sure that this is what the nails looked like as it has been slowly developing over time....I guess that is one more sign that the Sulfasalazine alone isn't really helping all that much as I am getting new joint swelling and now this new nail stuff on it (now 10 1/2 weeks). Thanks for the input.

Yup, thats what it looks like, especially if there is some "pitting" and yellow mange But that sausage your nail is connected to is telling too......

I tired nail polish too but my wife got concerned, also if yoy want some real pain have your nails brushed smooth with one of thoses blocks..... (I show sewing machines these days so my hands are on display......)

Ps your finger looks sore… I really don’t think sulfasalazine is doing anything for you at all!

I would agree!!! I can't get back into the Rheumy until April 23rd as she is booked up. I called because I was getting worse on the drug, not better (I can see having no change, but not getting worse). Anyway, I am on a "cancellation list" should anyone cancel in the meantime. So, I will just have to wait until then, at that point it will be 3 months since I have been on Sulfa. Hopefully she will add Enbrel or something!!!

Looks VERY Familiar! My nails have much deeper ridges than your photos, and big pit/dips on a few of them too. The ridges are starting to turn dark blueish/black too.

The rheumy I waited 5 months to see didn't give me a firm diagnosis of PsA either. (SIGH) But, I never had these ridges prior to the PsA...

Magenta nail polish for you it is then!

Dani, go to images.google.com and search for nail psoriasis. There you will see the various things that happen to nails with psoriasis. I found pictures that matched the appearance of nails which my pcp said had fungus ... and she agreed that it looked very much like psoriasis. My rheumy said "it looks like psoriasis to me, but I have to send you to a dermatologist to confirm that". I'm still waiting to see the dermy.

As for your pic, I see the "salmon oil stain" and ridging. Looks like a possibility to me.

Yes it does, and each nail can have it and then look good for a while then back again , it's all such a beautiful gift, that comes from PSA, and gezzzzzz it's free. My nails have been like that since I am 22. When on finger starts looking better, another is there to take over, and toe nails ........lets not even go there!

Yikes! I'm so sorry. I've had it on my nails as well- it's easy to cover up on your toenails, but not so easy to hide on your hands. Don't get acrylics because they just aggrevate it. And be careful because if you are like me the nails will eventually start to separate from the nail bed- which is painful as well as unsightly- see your Rheumatologist!