READ THIS ! from the sellers of Abbott laboratories - note his marketing ploy!

Abbott's Humira: A Drug To Buy Into

Disclosure: I have no positions in any stocks mentioned, and no plans to initiate any positions within the next 72 hours. I wrote this article myself, and it expresses my own opinions. I am not receiving compensation for it (other than from Seeking Alpha). I have no business relationship with any company whose stock is mentioned in this article. (More...)

There has been much buzz in the news lately regarding Abbott Lab's (ABT) drug Humira. Humira is Abbott's largest selling drug on the market. It is primarily used to treat Rheumatoid Arthritis, but also carries significant value and potential to treat other auto-immune diseases. The FDA had been concerned over the overall effectiveness of Humira for treating other diseases such as Ulcerative Collitus. However, just recently, the FDA panel announced that they would back the marketing of Humira for treatment of Ulcerative Collitus. While this doesn't mean for sure that Humira will be approved by the FDA for the treatment of Ulcerative Collitus, it is a strong indicator that approval will happen soon because the FDA generally follows the voting of its board (Another similar case happened recently with Novartis (NVS) and their drug for cystic fibrosis).

The link for the following graph can be found here. 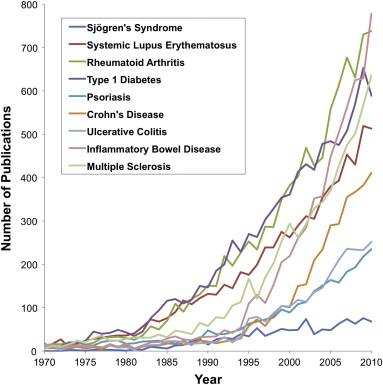 Humira is by far the best drug on the market for treating autoimmune diseases, and has proven to be much more effective than Johnson & Johnson (JNJ) and Merck's (MRK) drug Remicade. Humira's revenue was over $8 billion in 2011, and is expected to top $10 billion annually in 2013. Aside from treating Rheumatoid Arthritis, Humira has also been used to treat Plaque Psoriasis, Psoriatic Arthritis, Ankylosing Spondylitis, and Crohn's Disease. Adding Ulcerative Collitis to the list of diseases that Humira can treat would be another step in the right direction for Abbott and Humira to conquer more of the growing autoimmune market where they already control about 30% of total sales.

Abbott is currently priced at about $65.50 a share. If Abbott gains leverage in the autoimmune market with Humira and is able to grow sales to $12 billion or above annually by 2016, according to Trefis, this would present a 5% upside from the current price estimate of $67.39. However, if sales were to fall to below $7 billion, Trefis believes this could be a potential downside of 4% or more in this segment of business alone. I tend to be optimistic knowing the given circumstances of rising autoimmune diseases and I say Humira and Abbott present a terrific growth opportunity to buy into.